Earlier this year, the news was about "subprime" and only subprime, and banks mostly took writedowns for expected losses due to subprime. This worried me a lot, because all of the charts said that risky Prime and Alt-A loans were of a similar size, but resets weren't due until 2009-2011. (The more-pessimistic-than-most Nouriel Roubini estimated last month that we'd only written down $350B out of $1T in direct mortgage-related losses.)

But unfortunately, the Option ARM numbers in particular seem optimistic to me, because one source reports that 80% of pay Option ARM holders make the minimum (negative amortizing) payment each month. This means we will have massive defaults when these things reset, in addition to the bunch of people that walk away due to declining home prices. 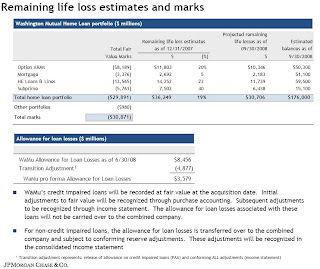 The doubly scary thing in the WaMu slide is that they're holding nearly 7x the dollar value in Option ARM and HELOC positions on their own books as subprime, so if the conservative percentages they've listed go up, losses will pile up quickly.

The second slide indicates that their "current estimate" for California across all loan types is 10%-24% additional loss (they say existing losses are 34%). 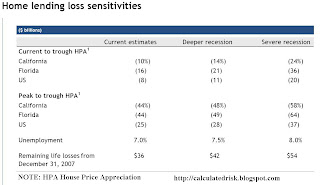 The problem is that Prime and Subprime are not on the same curve--the Option ARM holders are set to reset in 2009-2011, and so they're in time-delay by 2-3 years or so. Sounds to me like someone's model is using "current losses" to project forward, but subprime and prime are simply not comparable.
Posted by Michael on Friday, September 26, 2008