My uncle is a fine artist. He's almost 65, and has never really learned how to use a computer. He asked what computer to get, and I recommended a Mac. My dad asked me, why not a PC? My dad has two PCs, and everyone else in the family mostly uses PCs.

I even write a lot of software for the PC, and while I use both platforms (PC a bit more), somehow this one was pretty easy.

I told him, "The Mac has one way to do most things."

If he gets a Vista machine, and he asks someone who uses XP, "How do I connect to a wireless network?" He'll get the wrong answer. Because the answer to that question isn't the same, not even similar, on two versions of Windows.

Of course, the thing that cinched it with my uncle is Apple's "One to One" program, which provides a year of training for $99. They're going to lose a ton of money on my uncle, because he's dutifully going once a week, and doing the whole curriculum. But they'll have a Mac user for life.

Microsoft's ripping out their "Live" apps in the next OS, and I think this is a very bad move. Because it means that there's not a default way to do things. Yes there are good free apps that get included on new PCs (maybe Picasa is one of them) but they are rare. More often, their goal is to get you to upgrade or spy on you, not to make a good experience. 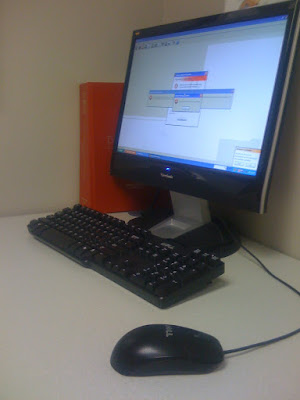 Photo from my doctor's office: 4 offers to upgrade trial software.

When you don't have a default way to do things, that means there are multiple ways to do things. You "go online" and try a bunch of them, and you get spyware with half of the free apps. You spend a bunch of money to get a "premium" tool, but nobody else you ask actually knows how to use it.

Apple's OS isn't more secure by design, but the funny thing is that it's more secure because you don't have to download tons of stuff to get it to work.

A default way, a usable way, a way that's not buggy and doesn't make you download stuff you don't understand.

Now when I talk to him on the phone, we talk about art and design, instead of which software to use to get something done.
Posted by Michael on Sunday, August 02, 2009