Very excited to see the L-Prize, and Philips with the first entry!
http://www.lightingprize.org/pdfs/LPrize-Revision1.pdf
http://www.lightingprize.org/news_phillips.stm
Finally we might have something better than non-dimmable CFLs with poor color rendition, and better energy efficiency as well. (The L-Prize demands 90 lumens/watt.)
However, I do wish the prize had incorporated one of the "better than CRI" methods of color quality estimation. The L-Prize specifies CRI>90, but CRI has some issues.
CRI is Outdated: Enter CQS...
NIST is working on a new "Color Quality Scale" to fix CRI. Still in the proposal phase, but it looks very good.
Today's CRI is an average response over 8 color swatches (and not quite the right 8 colors). One of the measured samples can be reasonably bad, and a light source still gets a decent CRI score. CRI attracts lots of critics: it uses an ancient color space, and there are a bunch of other issues you can read about.
To fix this, CQS tests 15 saturated samples instead of the 8 pastel-flavored samples that CRI uses (since the latter don't show distortions from modern LCDs very well).
From an article at NIST:

None of the eight reflective samples used in the computation of Ra are highly saturated. This is problematic, especially for the peaked spectra of white LEDs. Color rendering of saturated colors can be very poor even when the Ra value is good. Further, by optimization of lamps’ spectra to the CRI, Ra values can be made very high while actual color rendering is much poorer. This problem exists because too few samples are used in the calculation of Ra, and they are of too low chromatic saturation.

Illustration from http://colorqualityscale.com/ here. Illustrated is the color response from a fixture that scores CRI=80, but CQS=73, because it sucks at a few particular colors. 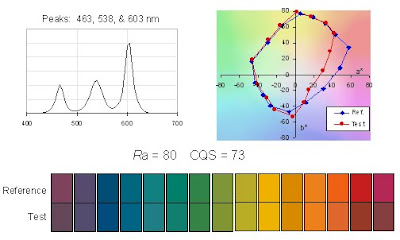 CIE has also announced their interest in doing a project like this, but you apparently have to pay to see their proposal, so I don't know much about it.
Posted by Michael on Sunday, September 27, 2009