Williams Sonoma: Turn off the lights, save a job 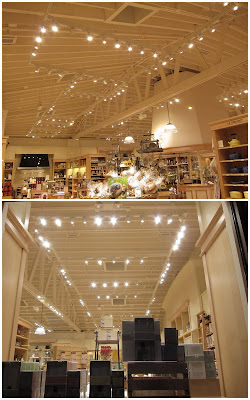 We walked by a Williams Sonoma store in Santa Monica last night after dinner. The lights were dazzling, almost as bright as day.
We stopped at first to read the sign posted that said this particular store had been caught overcharging a customer: $7.50 above the marked prices for one receipt. Apparently there are law-enforcement stings for this, and when a store gets caught, they have to post the report in the window. (Kind of how restaurants that leave raw eggs at room temperature have to put a "B" on their window.)
But never mind that. The store was closed at 8PM when we walked by, and so all this light seemed to be a bit of a waste. Maybe they were using some sort of energy-efficient lights? Nope, seemed that all the spots were halogen (probably 40-60W apiece), so we stopped to take a few pictures of the spectacle.
And by now it seemed like really kind of embarrassing waste of energy.
Making a guess as to the number of fixtures, Lorna and I figured that this single store is using 10-20kW all the time, for an energy bill of maybe $1000-2000 per month. The average California resident averages <1kW.
But the cost of this electricity is also a job! They are spending enough on electricity every night to pay a half-time employee, per store.
To make this even better, I opened up Calculated Risk tonight, and found a "poor me" article about Pat Connolly, an executive vice president of Williams-Sonoma, wondering how in the world he will increase profitability.
Apparently, Williams-Sonoma is closing stores and strong-arming building owners to give them cheaper rents in order to save a little money.
But it doesn't take a Kyoto Protocol-sized effort to see a way to save a little more!
They could save quite a bit of money by turning off some lights. My hardware store even sells light switches for less than $7.50.
Posted by Michael on Tuesday, March 23, 2010