After a few hours using it, I think Google has done a decent job with Google+. It's a gigantic improvement over Buzz.

I also believe they have over-thought the edge case "I'm in charge of my privacy", and perhaps killed some of the serendipity that is the real magic behind social software.

Let's start with some stories.

We recently had a baby, and we talk (a bit) about being new parents on Twitter and post pictures on Facebook. But what's amazing is the half-dozen people we both used to work with who've become "parent friends" due to this change in our lives, because of social media, because of the messiness of it, and because of the serendipity of it.

I wonder if in the Google+ world, we would have ever discovered these connections. Using the "Circles" UI to its fullest, I'd have a "parent friends" circle, and I'd not show any evidence that I've become a parent to my nerd friends. Why would they necessarily care? I don't really know for sure that they care, so I probably wouldn't pester them. And that's the fundamental problem with Google+.

And, Once I Broke my Foot

I broke my foot two years ago, and through a Twitter post that wound up in Friendfeed, learned that a former colleague had broken his arm at the same time. It became extra-interesting to post updates because I found out someone was going through a similar set of challenges at the same time.

The idea that "circles" represent the world exactly like real life seems to be failing me. In real life, people notice I have a baby carrier and had a foot brace, but online, these things don't happen.

Also, in the real world, I meet new people sort of by accident, and this doesn't happen as much online. The best approximation is a person who makes an interesting comment, and Google+ does this as well as anything else online.

But in some ways, that's why the messy, serendipitous social media "oversharing" works at all. Because it approximates context, not because it excludes it.

Much like eBay and Craigslist created markets that barely existed offline, I think the most magical experiences online are the unexpected and accidental. If you put a thing online that all your real-life friends think is weird, you'll find a million people online who actually agree with you. And if you had to name them all first, you couldn't do it.

I can't remember ever experiencing this sort of serendipity over email. But most certainly it happens every day on Twitter, and occasionally it happens on Facebook.

In some ways, Google+ is trying to do a better, more social email, almost a half Facebook and half an awesome address book, and I grant there's a place for that. But some aspect of it feels like work, not play. Perfect for a company that's a bit secretive but has a rich internal culture, but not so applicable to real life.

And so I worry that the lack of magic will hurt it in the end.

My overwhelming feeling is that the UI that you use everyday in Google+ has tons of friction.

For instance, maybe I'll spend 5 minutes ever in my life adding friends to circles, and it's insanely cool and fun. Fantastic. Magic.

But then, there's this UI you use every day, the one that creates a "To line" email-style interface to making a post. I don't like it at all. It's cumbersome and a lot of work.

This part of the interface could be amazing, and instead, it's more boring than email. It feels transient, and it's on the wrong part of the page. Yes, if I click the "Friends" container before making my post it sort of auto-fills for me (okay!) but it doesn't show who I've left out, who I'm including, or anything like that.

But basically, it's too opaque. You get a little blue tile that says "Friends" on it, and that's all you know. Once you close the popup it doesn't say how many friends you have, or show their faces or who's online, who's been online in the last week, or anything. It's anti-social.

And it makes me think a lot before posting, which means I'm going to post a lot less. "Is that person in Family AND Friends or just Family? Maybe I'll just email it."

If they fix nothing else, let it be this interface: 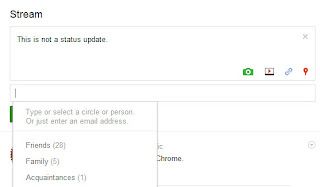 What's the filter?
In some ways the brilliance of Facebook is that they've spent a great deal more effort on what the receiver wants to see, rather than what the sender wants to share.
And in so many ways, this focus is a much better approximation to real life than the "need to know" classified access-control-list email addressbook complexity of making a person limit their sharing to a certain circle of friends.
My Facebook friends are mostly the people I believe aren't insane. They might not want to see baby pictures all the time, but I don't mind if they do.
And I'd rather the software takes care of that....if I put "Baby Girl" in the title, some people won't want that stuff ranked very high, so it can be harder to find. If Facebook doesn't do this already, I imagine their approach leads naturally to classifying content (not just people) and showing information to the right people. (Bubble filter indeed, but why not.)
I know there's an important "user story" about a 19 year old who goes to a party and doesn't want her parents to see the pictures. The trend we've seen is that people facing the un-coolness of their social network ("Mom's on Facebook!") will gravitate to using a different site for this purpose. No single site has been able to "fix" this problem, no matter how good its groups UI. Facebook has a fantastic Groups system that nobody uses, but they don't make it so prominent.
In some ways it will be neat to see if Google+ manages to catch this endless churn and contain it. But I think to do it you have to make cool and identifiable "spaces" for people/circles to interact. (Even Facebook Groups have their own photo galleries.) If there's a circle for your friends, you should be able to brand it, like the new cool site you moved to because your mom joined Facebook. I think a subtle tab highlighted on the left isn't enough.
In trying to contain the "mom problem", again, the network loses. Google+ has a "Share" (reshare?) feature, but this again has a ton more friction, compared with Facebook's version: "Michael commented on Lorna's photo..." with friend-of-a-friend visibility.
In some ways, the seamless way that FriendFeed would remix streams of friends based on "Like" clicks, and Twitter with Retweet, simply had no historical precedent in online communication. Email forwarding is hard work, and so is the Google+ Share button.
Serendipitous or intentional? Facebook's is magic. Google's is more like email forwarding.
Profiles fit great with Google search, but activity streams not so much

For years, Buzz and Picasaweb kept asking to make my profile public. And I kept deleting it. Here's why.
When you search for a thing on Google.com, you expect relevance. And if you're the one being searched for, you want to look good, or not show up.
If you search for my name, you want to find some relevant things about me. Putting "Mike once liked this dorky video on Youtube" (with a kind of authority) at the top of that is somehow out of context. And it's worse if I did that 4 months ago, and I just haven't done anything since.
In my Google Profile, social interactions I've had that happen to be public take up 80% of the screen (even if it's empty or out of date!), and links that I've made to important stuff in my life take up the small bit in the corner.
That sort of "information" makes sense if you visit a twitter.com page, but at a google.com URL, it is not a good representation of a person. You kind of expect "best post of all time" and you get "Mike was in a bad mood when he made a public post 2 months ago."
I'm sure Google has wrestled with this dozens of ways, but I think there's a conflict in there.
Social+
Perhaps Facebook's most audacious and brilliant move is in trying to make the receiver the filter of content, while keeping loose track of potential friends. The filter problem is very unsolved, but it's very exciting as well. If you can show me what I want to see in a single space (not in multiple tabs), and if you can make it relevant based on the content and the context, I think that's a brilliant user experience.
I think the Google+ emphasis on sender-driven sharing replicates email too closely, down to an awkward UI for sharing (which feels like email forwarding). It makes sense to a person who's in a certain habit of using email all day, but it also misses a huge number of interactions that magically, serendipitously happen online via Likes, Retweets, and simpler interactions online.
Google's first effort is impressive, and I think I will use it more than Buzz. It actually nearly solves the "huge niche" of private collaboration, and maybe people will use it for work more than play.
But in the initial version, I think it fails in not being cooler or more magical in any notable way, when compared to the thought leaders in the space, Facebook and Twitter. Google has tons of magic, but it's just not coming through. Lessons learned from the Buzz launch, I'm sure, an abundance of caution. Don't use the technology to scare people!
But when you allow and encourage serendipity, you get magic. If you worry too much about privacy, you capture a ton of niches that care about these things, but you don't become the new way people communicate online.
You just...become a better version of email.
Posted by Michael on Thursday, June 30, 2011